Tomorrow, the Pennsylvania Department of Community and Economic Development is expected to layout their receivership plan for the city of Chester – at least that’s what they said 9 days ago. In what seems like a last ditched effort to make a major move before Chester’s government gets taken over by the state, Chester City Council is going against the orders of Delaware County Court of Common Pleas and proceed with the bid process for the sale of the Chester Water Authority.

When the Delaware County Daily Times asks Chester mayor for comments, all he can say is…

What exactly does that all mean?

A newspaper can’t negotiate or work out the sale of the Chester Water Authority? Their role is to flesh out all sides of this important deal from the decision makers in order for the people most impacted – the ratepayers reading the paper – understand what’s going on.

Being transparent usually means you are communicating clearly what your position is and how it benefits those you represent with the goal of rallying people to support your goal. I don’t know a single person who is in favor of selling the Chester Water Authority besides city government. It may be a great idea, but no one knows why.

On the contrary, the Chester Water Authority has been extremely transparent, vocal and open to reporters to defend their side of the equation. They have forged a campaign of support that reaches all the way out to western Delaware County and Chester County where lawn signs are regularly spotted in the nice neighborhoods. I have yet to see a lawn sign say, “Support the City of Chester selling CWA.” 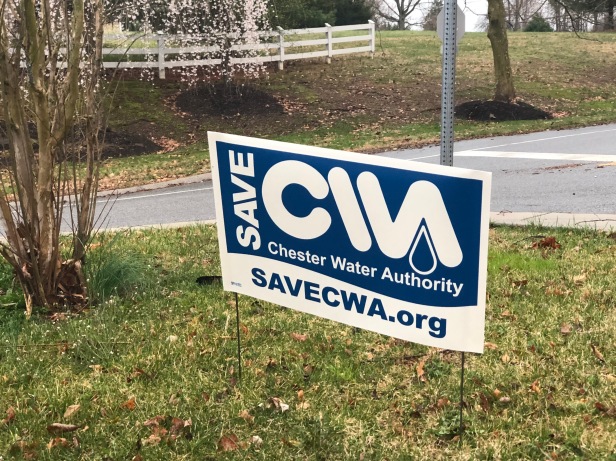 A transparent city government would gather Chester residents and other CWA ratepayers in a room and explain why they are pursuing the sell of the Chester Water Authority. Of course, we all know it’s to bring Chester City a boat load of money, but no one understands how bad Chester’s finances are because the repeated public praise coming out of city hall is their run on balanced budgets. If the city budget is so balanced, what’s all this talk about a huge pension debt? How huge is it?

Transparent city government makes their financial statements available. But they’re 3-years behind on audits. It makes you wonder what took the State so long to come to the rescue.

Chester’s mayor says, ‘We’re going to do this the right way and the legal way.’

It really isn’t wrong to talk to Chester residents about this deal. This is our city that we elected you to run. Your style of transparency isn’t bringing you any groundswell of support that I’d think you’d like to have from city residents and CWA ratepayers.

The ‘legal way’ sounds like a cop-out. We want to hear from the mayor explaining how he’s making this move in our best interest, not some highly paid lawyer boosting his retirement plan.

I don’t think the mayor realizes there may be some people who want to be on his side. For that to happen, he has to talk to us; court us; appeal to us; actually being transparent with us would even help.

The reality is, Chester’s finances are probably much worse than we are being told; Chester Water Authority has the support of its customers but the courts seem to be ignoring them; a sell of CWA will upset more people outside of Chester than inside of Chester; and the State has been calling the shots all along.

One thought on “Chester Water Authority is as transparent as water”